FEATURED BROKER OF THE MONTH

For the month of love, we’re highlighting, a lovable real estate broker. She graduated from New Era University with a degree in psychology in 2005 and has taken units in the master’s program at Pamantasan ng Lungsod ng Maynila between 2007 and 2009.

CRB Christine Jaye S. Figueras struggles as a real estate broker have paid off since she loved the life of being financially independent, going on holidays, spending time with her family, shopping, socializing, and attending events. She enjoyed earning, spending more time with her family, and interacting with clients. As a result, she become a professional real estate broker and self-employed in 2015.

FEATURED BROKER OF THE MONTH 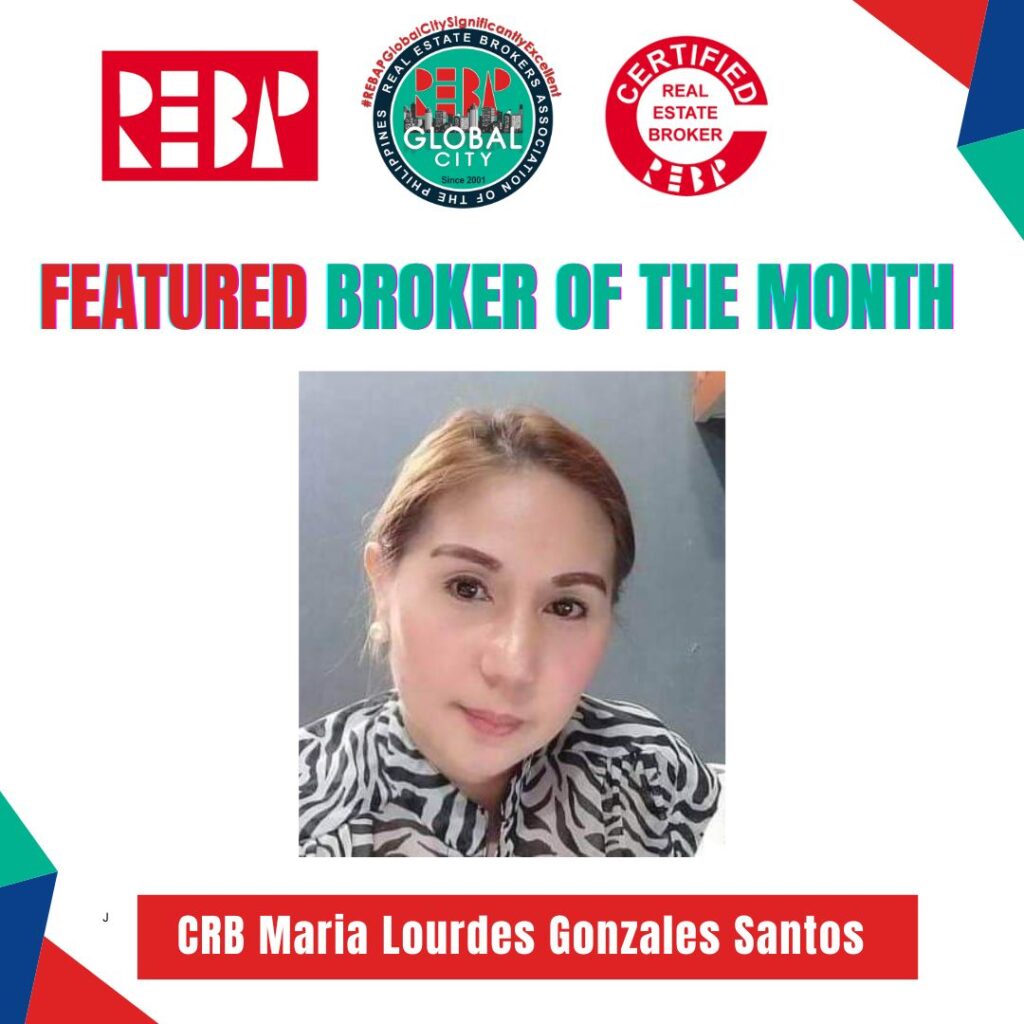 January is the month of all beginnings in a year. Its primacy is for making decisions for the whole year of abundance. The primacy of abundance is the love of God first according to our featured broker who is a graduate of BS Business Administration major in Business Management from La Consolacion College of Manila.

She is an accredited marketer of the Philippine Retirement Authority (PRA) since 2008 and served as a trustee of the board of Accredited Marketer’s Association, Inc. of PRAor PRAAMAI from 2008 to 2012.

She never planned to be a broker. It was her former Japanese Sacho (boss) who pushed and supported her to attend Real Estate Seminar. She passed the Real Estate Professional Examination in 2014.
Her other current corporate functions are Director and Corporate Secretary, Zipang Property Management, Inc.; Director, Let’s Light Up, Inc.; and Corporate Secretary, Asahi Asia Construction, Inc.

As a true-bloodied manager, she founded her own company, the Philsworld Documentation Services in 2010. The company is doing documentation support and advice on living, investing and conducting business in the Philippines to both foreign expats and locals.

Year 2022 is a year for REBAP Global City Chapter as first time in its Chapter and REBAP History that it bagged the 5 Major REBAP National Awards and was awarded last December 27, 2022 during REBAP Anniversary and Christmas Party held at Kalayaan Hall, Club Filipino, Greenhills, San Juan City.

REBAP Global City Chapter took the 2022 Best Chapter (Large Category), which means membership with over 50 members in a chapter. It bested Cavite Chapter for 1st Runner-up and Caloocan Chapter for 2nd Runner-up.

Before the year ends, REBAP Global City Chapter fulfilled its mandate and affirmed its 2022 tagline “Leading At Its Best!” 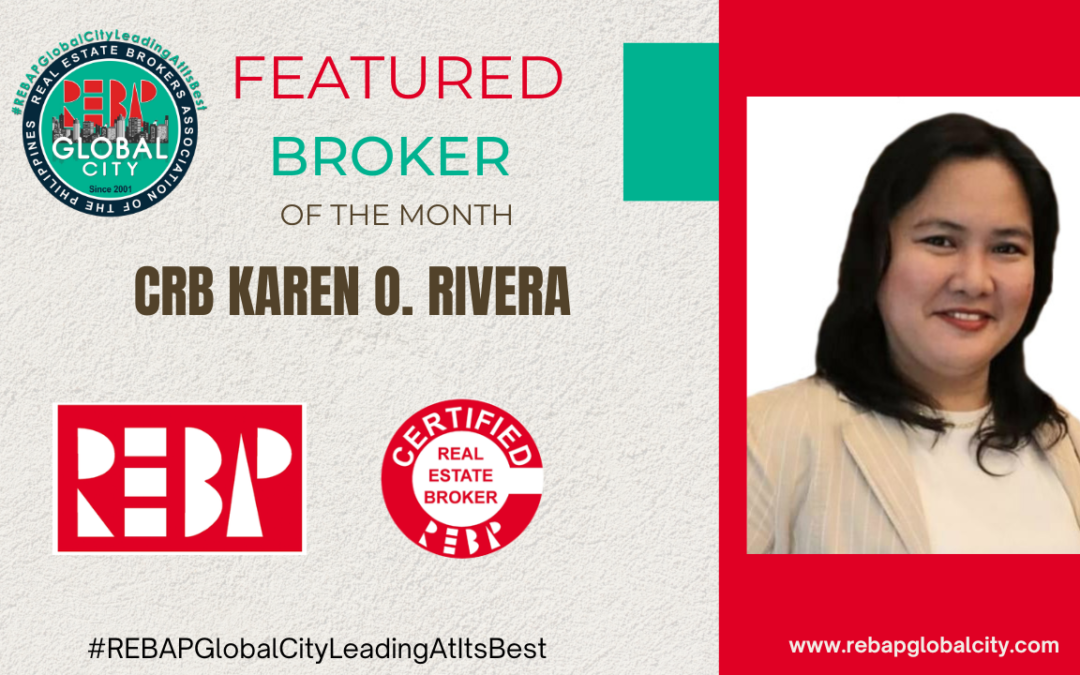 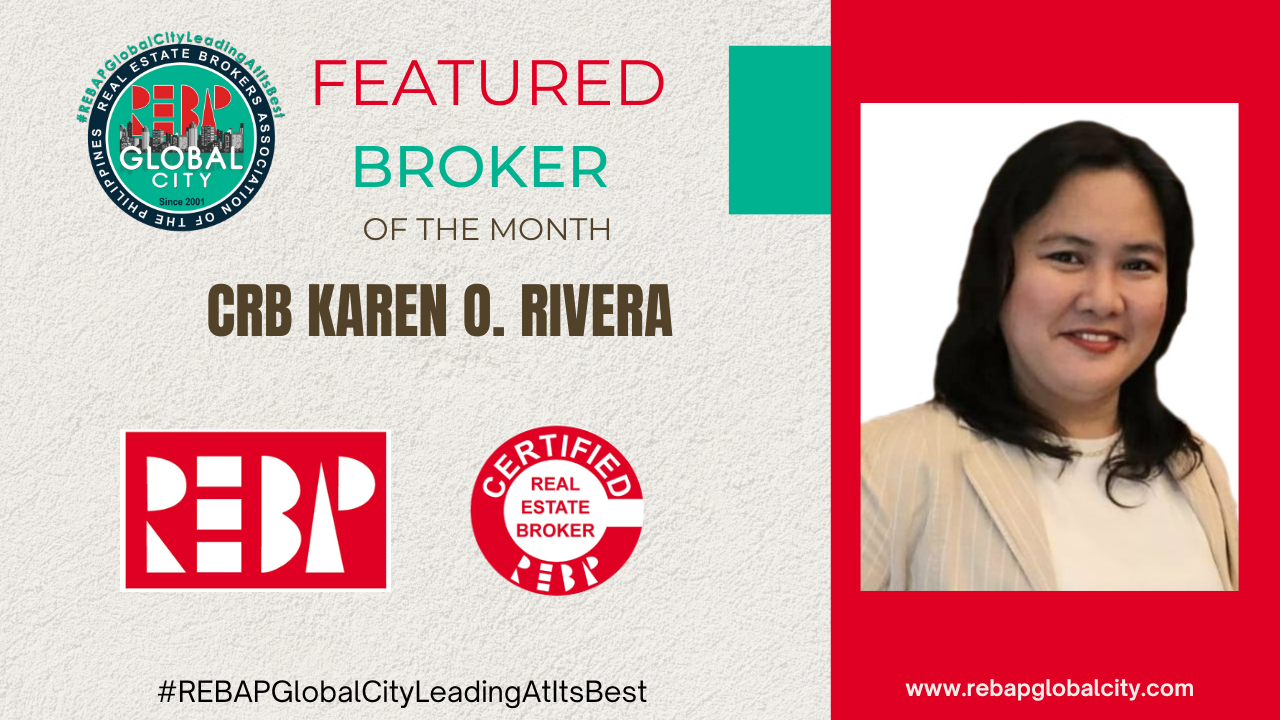 September is a symbol of the strength of character, marriage, and family, thus this month’s featured Real Estate Broker is a woman who is happily married with three children.  The Greek playwright Euripides made a variety of references to women’s strength in his famous work on the Trojan Women.

As such, CRB Karen Oribiana Rivera is a true-blooded woman born in the year of the Dragon, who is gifted with innate courage, tenacity, and intelligence. She started her career in real estate in 2007 as a property consultant in Camella Homes, one of the country’s finest. In that same year, she passed the Real Estate Brokers licensure examination and subsequently became a REBAP member in 2008. From 2007 to 2010, she became a sales manager of CDC Holdings. A year later when she left CDC, she established an independent brokerage. Truly, she is a woman who is not afraid of challenges and is always willing to take risks.

As an epitome of a woman in Euripides’ essay, she remains enthusiastic and confident as a professional broker who is engaged in an array of specializations, such as titling transfer; project, condominium, and memorial lots selling; re-subdividing property; and loan assistance.

With these, her name has been attached to the following housing companies, such as; Camella Homes, DMCI, CDC Holdings, Mololex, Masaito, Antel Addas Group, Earth & Style, Exceed Realty, Carissa Homes, Balikatan, and Homemark.

Strong will, passion, perseverance, and selflessness made her the Best Chapter Member of REBAP Global City. 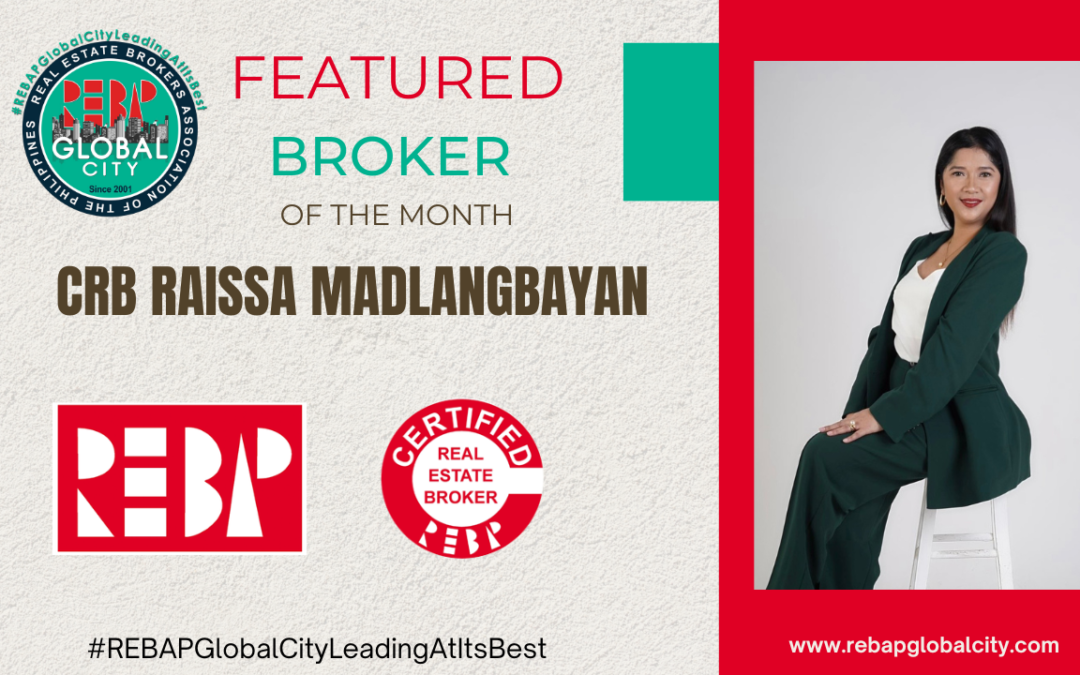 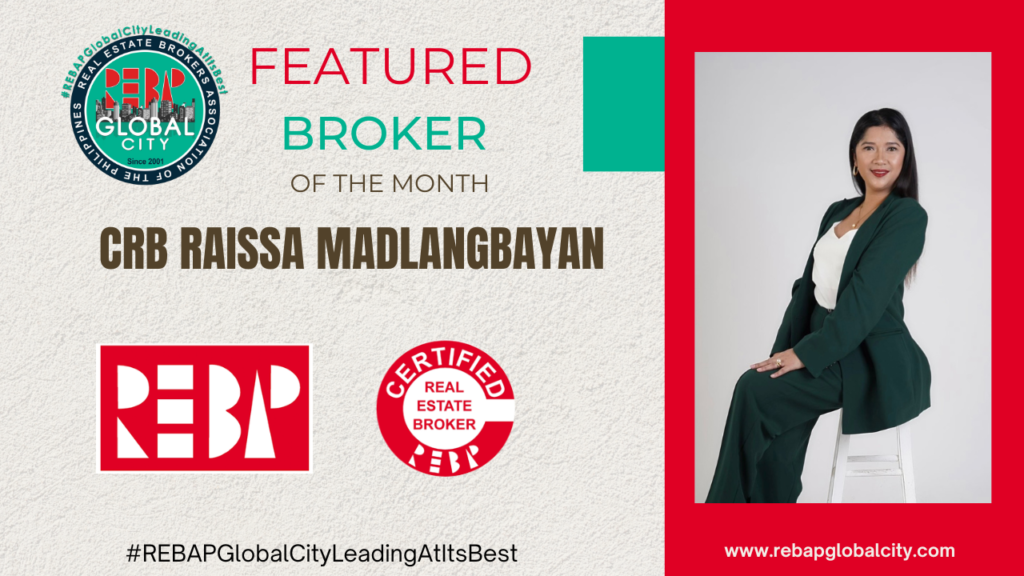 August can never be a ghost month, because for a woman, every month, every day, every hour is a precious time for perseverance and hard work. Thus, our featured broker for August is a woman with a virtue of positivity, born at the right time and place.

My dear colleagues in the industry, please meet CRB Raissa R. Madlangbayan, an achieving woman with two distinct assets: chivalrous and gallant, being born in the Year of the Pig, and loyal and determined, being a true Capricornian. The chemistry of these virtues, which at a young age in her late 30s, made her the co-founder of the RMS Realty Inc. in November 2021, with a present address in Penthouse 2, VGP Center, Ayala Avenue Makati.

She had become the person she is now because of the character and values developed and nurtured in her during her education at the Pamantasan ng Lungsod ng Maynila with the BS Psychology course.

She took advantage of various opportunities with rich imagination and sharp observations about people, especially those related to business. She began by opening a family business from 2005 to 2007, and then from 2007 to 2009, she worked as a BPO Customer Service Outbound Representative for Xcelerate Center Inc. and Sutherland. She used this as her experience and stepping stone to becoming a Property Specialist with SM Investments Corporation, Hamilo Coast–Pico De Loro, and Tagaytay Highlands (2009–2010), then with Robinsons Land Corporation (2010–2013) selling condominium units.

Armed with knowledge and skills related to real estate properties, propped up with determination, in 2013, she attended classes at the Urban Institute of Real Estate and successfully passed the Real Estate Broker Examination the following year. She engaged in resale luxury properties in high-end villages, such as McKinley Hill Village, Bel Air Village, San Lorenzo Village, Urdaneta Village, Dasmarinas Village, Forbes Park Village, and Class A condominiums in Makati and BGC to name some. At the same time, she handled the leasing of ex-pat accounts, such as ADB and other multinational companies. Supported by her tenacity and license, she stands up to be a Freelance Real Estate Broker from 2014 to 2021.

With this strong momentum in her career as a registered real estate broker, she co-founded RMS Realty Inc. in November of last year, a general brokerage company specializing in real estate leasing, resale, and pre-selling.

Now that she is a manager of what she started, she is in charge of setting the company’s objectives and plans, overseeing the entire staff, and ensuring the overall accountability of the business to shareholders and the general public. 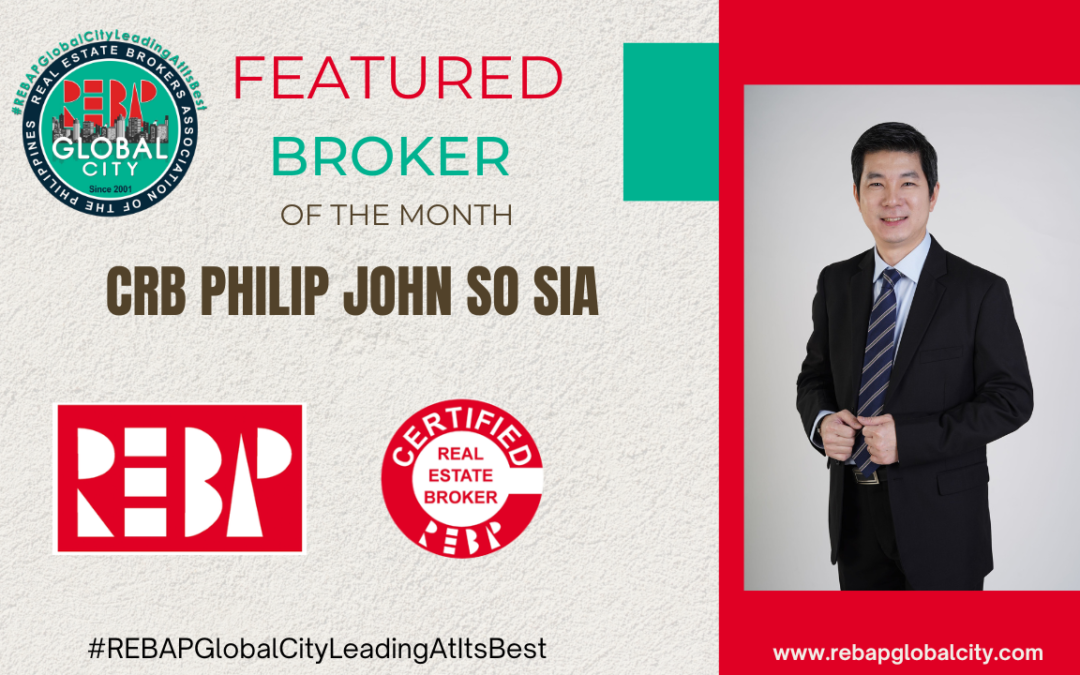 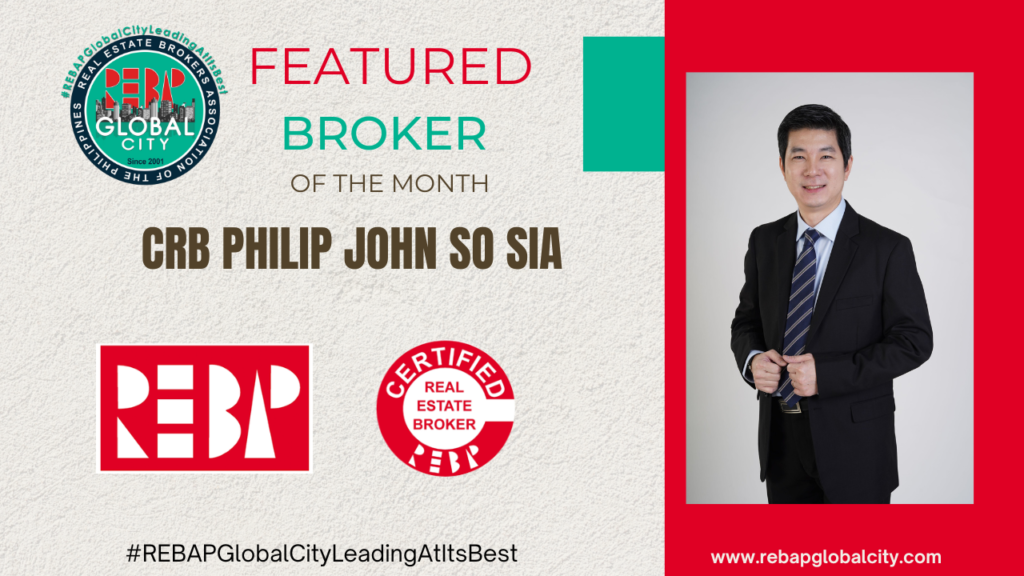 CRB PHILIP JOHN SO SIA
There is February in July because if July is the month of positivism, February is for devotion, care, and commitment. Why so? Because this month’s featured broker is a true-blooded February-born, a Piscean characterized by emotional awareness and diplomacy—a genetically dominant breed colored with responsiveness in almost all aspects!
Philip John So Sia is an engineering graduate in Electronics and Communication at the University of Santo Tomas, a polymath because he graduated Cum Laude, and a polyglot because he could communicate in Mandarin, Fukien, and Nihongo, aside from Tagalog and English.
As a creative engineer, he started as a Product Development Engineering Specialist and Design Engineer for Research and Development for the Ultra Slim Drive (USD) in a Japanese company, the Matsushita Industrial Company of Yokohama, Japan.
He trod the path of sales to gain experience in his plan to establish his own business. He became an Insurance Agent of Western Guaranty Corporation and later as Technical Sales Manager of Royal Galleon International, Inc. in a short period. What he learned here paved the way to enter the challenging world of the real estate industry.
He has proven to himself that he has this knack and wisdom in the real estate industry; thus, he consistently topped the yearly awards for Account Manager from 2010 to 2012 of Robinsons, Magnolia, and Woodsville Residences, to name some. Everything he did bore fruits because in 2011 of March he passed the PRC Board Exam for Real Estate (License No. 4869). He was one of the first successful passers of this Board Exam when PRC introduced it.
From 2014 to the present, he has been a Freelance Licensed Real Estate Broker specializing in condominiums, residential properties, and land. He is with the country’s leading developers, such as Ayala Land Premier, Alveo Land, Rockwell, Federal Land, Robinsons, and Shang Properties to name some.
As a steadfast and unwavering guy in pursuing his dream of establishing his own company, he established the RMS ABSOLUTE REALTY, INC. in November 2021.
Ladies and gentlemen, fellow CRBs, our featured fellow for this month is CRB Philip John So Sia!
#REBAPGlobalCityLeadingAtItsBest
#ONEREBAP
« Older Entries