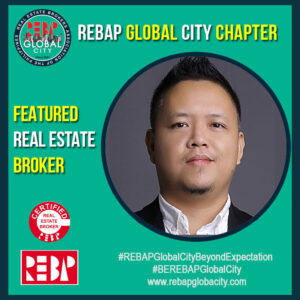 Lems, as what we know him, aimed for a higher goal and is now flying with his success!

CRB Lemuel Fallorina, our current Chapter president, did not become a Real Estate Broker by chance

but with the determination to be one. Graduated at UP Visayas Tacloban in 2002, he started his career as a customer service representative and was tasked to market IT products and service for seven years.

During this time, Real Estate condominium sales has flourished the market and he found it interesting to engage in, so he ventured into the business. He started as an in-house Salesperson of Empire East and found the job interesting by working during the daytime and keep his CS job during the night time.

He decided to level up his career due to big opportunities. In 2012, he took the Real Estate board and passed. And now being a Licensed Broker, he resigned from the in-house job with Empire East and joined top caliber realties such as Driven Marketing. In his  latest engagement, he was offered a position with SMDC as an Associate Sales Director.

He was introduced to REBAP Global city and right away became a member in 2013. He feels that the organization is his home and continue to be active and became the Chapter President to date.

With joyous hearts we welcome Lems as our featured CRB for this month.