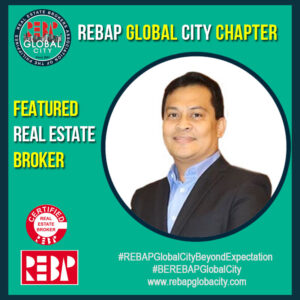 “Everyday is a learning experience”. That is the favorite motto of our featured broker for this month. He considers the daily experiences and interactions as a s ocean knowledge that he uses to improve and grow further.

Edgar, as we all know, is a graduate of BS Electrical Engineering in 1993. He was employed as a Branch Manager for Nissan Dumaguete from 1993 – 2008 in Dumaguete City, Negros Oriental. In 2008, he decided to explore new challenges and went to Afghanistan as a Procurement Specialist for PAE – Lockheed Martin company who was then a contractor for the US Department of Defense. In Oct of 2010,  he was offered  employment with SODEXHO Afghanistan as a Warehouse Supervisor. In almost a year in the position, he was promoted as a Purchasing Manager for SODEXHO Tanzania in Dar Es Salaam , Tanzania. In almost two years of his employment, the oil industry suffered a big blow and things went bad. His contract ended and he went back to the Philippines and later got employed with different companies. In 2016, he decided to transition his profession to Real Estate. While working as a Salesperson, he enrolled with Lyceum of Alabang and graduated with a diploma in BS Real Estate Management in 2019. On that same year, he took the PRC Licensure Examination for the Real Estate Broker and passed. In August of the same year, he took the PRC Licensure Examination for Real Estate Appraiser and got the 4th place.  Early part of this year, he was offered a part time job to be a college professor in BS REM for Lyceum of Alabang and is now a full pledge Real Estate Broker and a part time faculty. He is also currently serving as the PRO of REBAP Global City Chapter.